Disclosure: We are compensated for our reviews. If you click through the links on this page and make a purchase, then we receive commission and/or financial benefit. This is how we keep the content on this site free and pay for the products that are reviewed on this site. 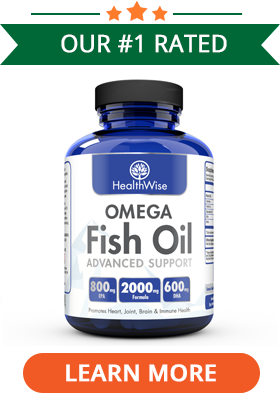 Nordic Naturals provides 650 mg of EPA and 450 mg of DHA per serving. Also included is 180 mg of "other omega-3s" with no specification as to what these are. This omega-3 supplement is not sourced via krill. They use anchovies and sardines to source their oil.

Nordic Naturals includes a natural lemon flavoring to help cover the fishy taste. Unfortunately, they are not using the more natural lemon oil.

There are many positive reviews for Ultimate Omega. Nordic Naturals is a very well-known brand. Many customers saw improvements in their arthritis and cholesterol. A few reported heartburn as a side effect.

We found quite a few customers unhappy with the packaging of the product. Some said that the capsules were stuck together in one big clump or felt extremely hard. Some even mention burst, sticky capsules that smelled putrid when they arrived.

When calling to ask about their return process, we were on hold for 23 minutes and 26 seconds before a representative answered and explained the return process. He was unsure about the process at first, then quoted directly from the website in his response.

They accept returns only for products that have a return number. You must call to obtain a return number within 30 days of initial purchase. You then return the product to them for a credit to be made to your account (minus shipping). If the returned bottle is marked in any way, no credit will be issued.

All in all, this product was Consumer's Survey's #3 omega-3 supplement due to many factors. They have a solid amount of ingredients but not the highest grades we've seen. They also have lemon flavoring instead of lemon oil. Some customers loved them and some had issues with damaged products. They do offer a 30-day return policy, although it is relatively strict.

For more information or to purchase this product visit their website.

P.S. While HealthWise is the best fish oil supplement we've found, we would still love to hear about any others you've tried. If you have had a great experience of your own, please send me an email at Beverly@ConsumersSurvey.org with the details.

One area in which many studies have come back with incredible results is mental health.

Depression is a very common disorder in today's culture. It affects 40 million adults living in the U.S. over the age of 18. 1 So what is depression?

Studies have found people who regularly consume omega-3s are less likely to be depressed. One study did 10 double-blind, placebo-controlled studies in patients with mood disorder giving omega-3 PUFAs for 4 weeks or longer. The results found a significant antidepressant effect of omega-3 PUFAs, which included an improvement in patients with clearly defined depression. 2

In another study, 15 trials were conducted with 916 patients. The results show patients with a daily range between 200 to 2,000 mg of EPA in excess of DHA had vast improvements in their fight with depression. 3

What Type of Omega-3 Helps the Most?

There are three different types of omegas, ALA, EPA and DHA. Of these three the omega that appears to lead the pack on fighting depression is EPA.

One study was conducted with 48 patients over the course of 8 weeks. They were given 1,000 mg of EPA with 20 mg of fluoxetine daily. The two combined showed significant therapeutic results. 4

With mounting evidence showing the effectiveness of omega-3s helping the fight against depression, it's imperative you find the right omega supplement for yourself.